Our Lady of the Sacred Heart of Jesus (St Trophimus Street) 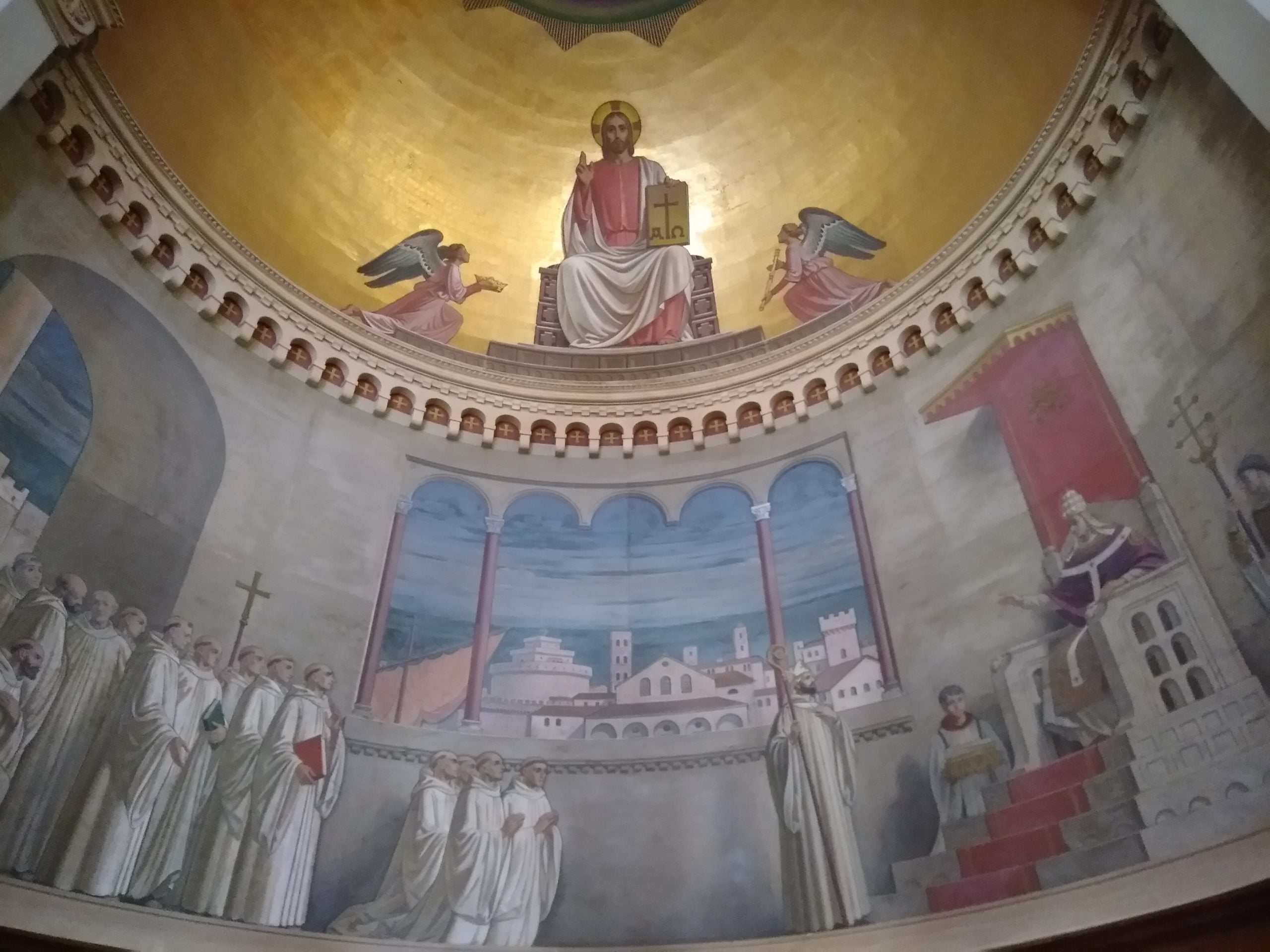 At the beginning of the 20th century, the population of Sliema was growing constantly. The bishop of that time Mons Maurus Caruana saw to it to have a new church where buildings have been rising profusely inspite of the nearby church of Sacro Cuor was made a parish in 1921. A site was chosen in Nicolo Isouard Street, near an area called Tar-Ramel.

The architect was Godwin Caruana Galizia. The church’s style is neo-romanesque, in the form of a cross, with a central aisle and another on each side.

The church was blessed by the bishop himself on 30th November 1940 and later consecrated by the successive bishop Mons Michael Gonzi on 29th September 1949.

Mauro Caruana, is buried in this parish church following his will. As per standard practice, all Archbishop’s are buried in the Mdina cathedral.

All paintings in the church are by Eliodoro Coccoli executed between 1941 and 1950. These include the titular painting, the two side altars and Via Sagra.

The titular painting is unique in Malta in that it is wall to wall. In such extensive length Coccoli paints Pope St Gregory the great (540-604) on his throne on the right, sending a group of monks to evangelize England. A group of monks are kneeling in the centre and others are standing on the left of the painting. Among the group of monks on the left, Coccoli left his portrait as one of the monks. In the background you can see views of Rome.

The apsidal cap with a central figure of Christ, Gospel in hand, imparting his blessings surrounded by angels bearing symbols of his regality. Along with Coccoli, Mr. Fsadni helped in the decoration of the painting in the 1950’s.

There are just two altars one in each side chapel, one dedicated to Mary Mother of God and the other to St Joseph.

Six stained glass windows where also commissioned to Eleodoro Coccoli, and where procured in the 1950 from the Milanese firm Bertuzzi. These portray the following saints :- Saint Lawrence, Saint Peter and Saint John Bosco on one side whilst the other features St. Paul, Saint Publius and Saint Agatha; in this case they represent the Patron Saints of Malta.

The Crucifix was commissioned to Mr. Toussaint Busuttil in the 1940. At the back of the crucifix there is representation of our Lady of Graces.

The pipe-organ was bought in 1948 from Crema in Italy. It is manufactured by Tamburini and has ten stops on two manuals. 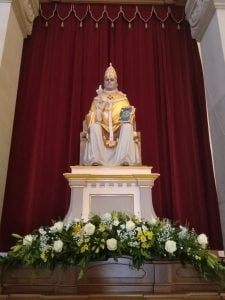 The statue of Saint Gregory the Great, was commissioned to Angelo Righetti from Brescia -Italy. The statue was sculpted in wood and was completed in 1952. The statue represents Pope Gregory with Papal tiara, a Bible in his left hand that represents the Gospel, with the right hand is imparting his blessings. The dove on the right shoulder is representing the Holy Spirit. As according to popular legend, Gregory was directly inspired by the Holy Spirit when he composed his homilies.

In 2015, during the year of the 75th anniversary of the foundation of the Parish, Monsignor Charles Jude Scicluna Archbishop of Malta, presented a relic of the saintly pope which was acquired from Rome and encased within the pectoral cross that decorates the patronal effigy.

The Parish church there are other statues: – Our Lady of Sorrows, Our Lady of Fatima, Our Lady of Lourdes, Sacred heart of Jesus, Saint Rita of Cascia and Saint Antony of Padua.

The opening hours of the Parish office are every Monday and Friday from 05:00pm till 06:00pm